Black Friday is a crucial time for retailers. To help prepare, we’ve come up with six helpful predictions for the upcoming shopping frenzy.

1. It’ll be a long and early Black Friday season 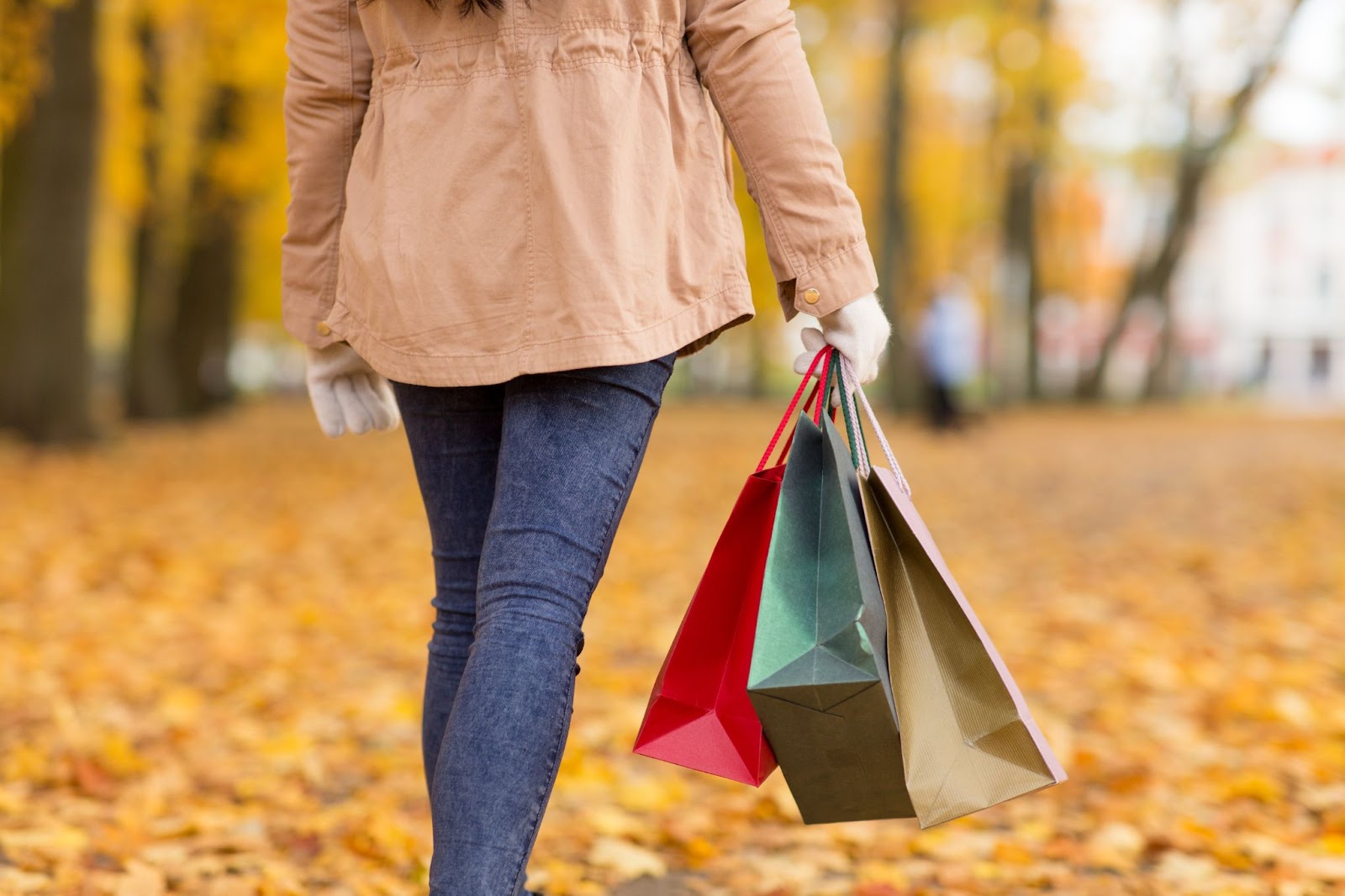 Long before the pandemic began, Black Friday had morphed away from a single day event into a marathon-style season. The pandemic then quickened the pace at which consumers moved their habits online.

This year will be no different. In fact, it may even be longer.

Last year, Amazon (who accounted for 17.7% of all Black Friday sales), began their Black Friday “pre-season” sale in the beginning of October. It’s very likely they’ll pull the same deal this year, leading other retailers to move their bargains up to compete.

This, paired with the issue of the limited stock dilemma last year, might cause shoppers to fear another year of popular items selling out fast, prompting them to snatch deals up early on.

Our advice - have your marketing strategy and your bargains set to go in early October. 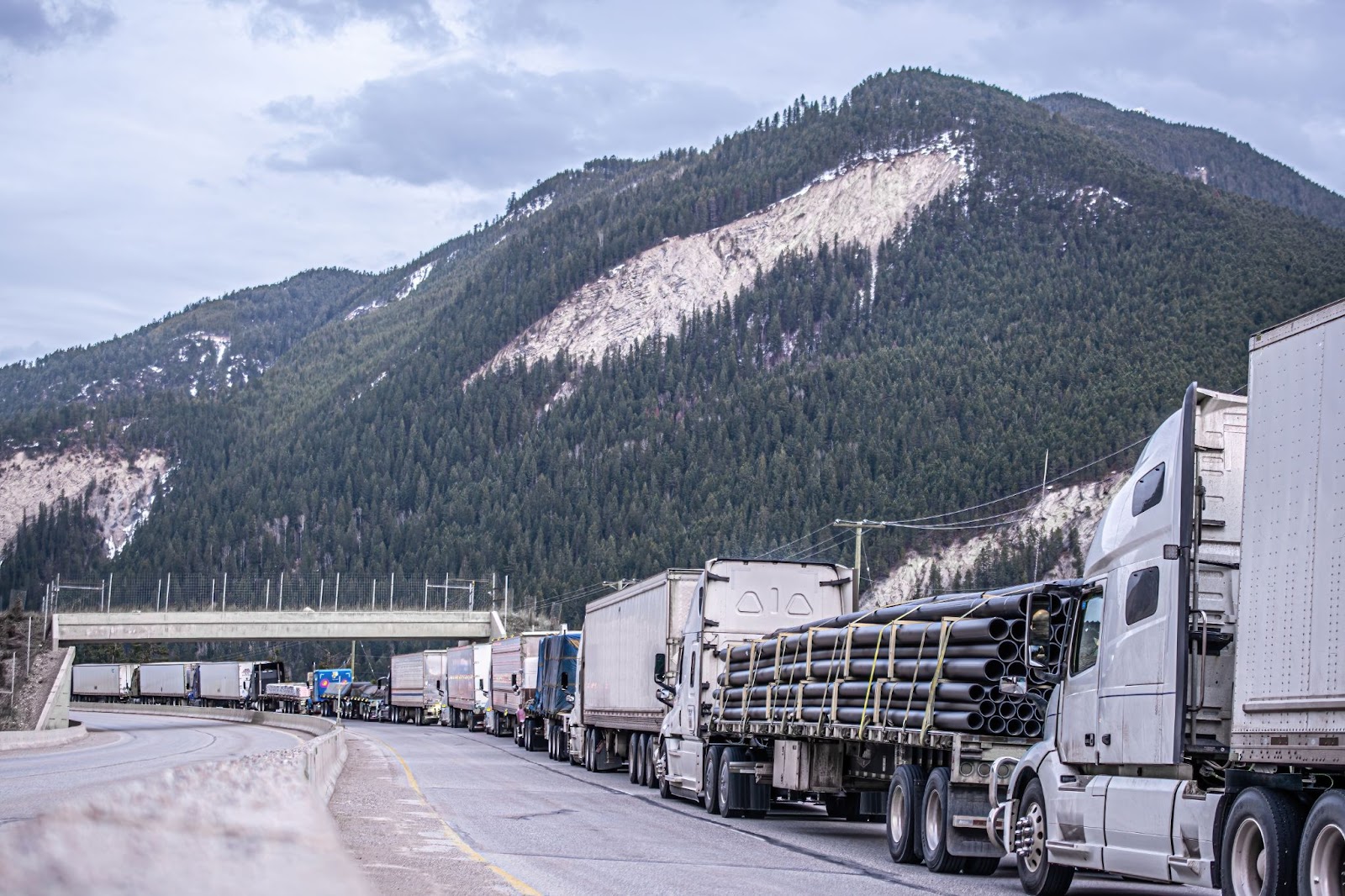 In 2022, skyrocketing fuel prices are adding onto the existing complications causing global shipping problems, such as a lack in HGV drivers, low supplies of shipping containers, and so on.

In order to take pressure off maintaining stock levels during the five-day stretch and to make up for delayed order and delivery times, we predict another long sales season.

Earlier sales mean retailers need to plan ahead for longer periods of increased demand for stock and higher traffic. During November 2021, ‘Out of Stock’ labels increased by 169% compared to pre-pandemic years, which is extremely problematic for merchants when 70% of consumers say they’ll desert a company if an item they search for is out of stock.

It’s likely that we will witness a similar trend this year, with spending in November increasing, while spending over Cyber Week stagnates. Since deals will start earlier, October will likely see a record-breaking spike in spending as well.

Additionally, shoppers may be more cautious about how and where they spend their money due to devastating levels of inflation across the globe. This could cause consumers to rely more heavily on earlier Black Friday bargains, especially those hoping for new electronics or a wardrobe upgrade.

Here's a look at online spending over Thanksgiving Day and Black Friday since 2017: 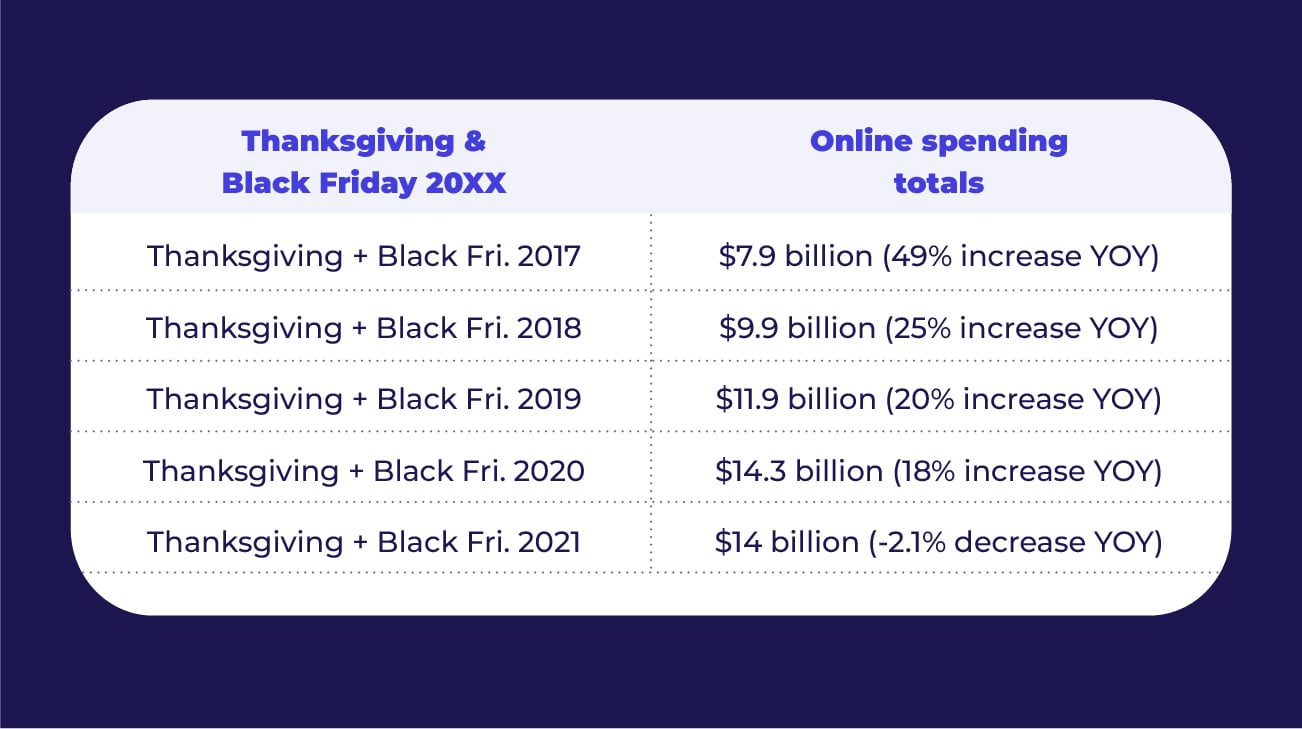 With a longer sales season, retailers can expect their Black Friday margins to stretch out over a longer period as well.

Our advice - Don’t panic if Cyber Week sales are down. Instead, look at big picture spending over the entire stretch of Black Friday (October & November). 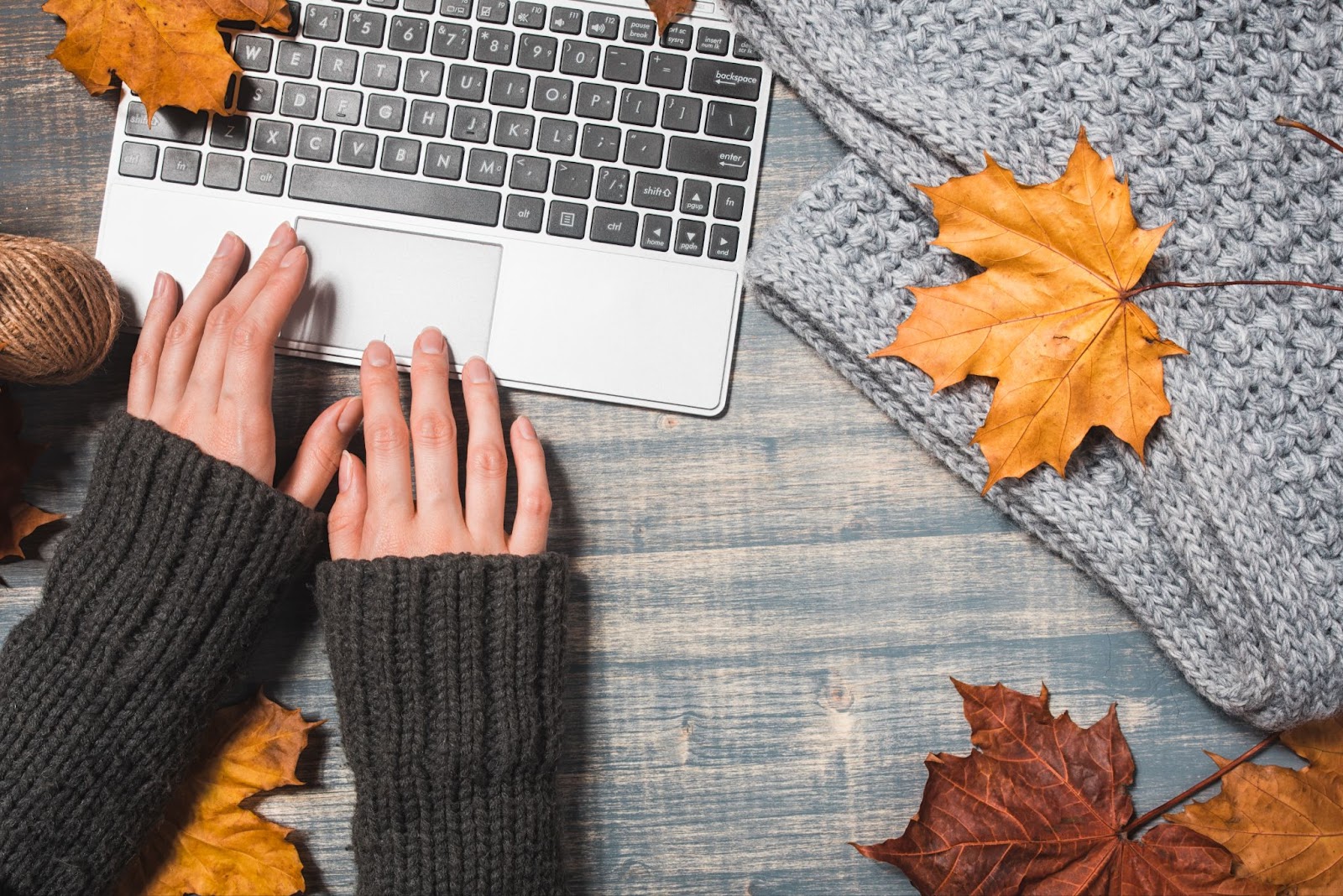 During the pandemic, major retailers revoked the tradition of opening their storefronts on Thanksgiving Day. They claimed employee appreciation and COVID-related health concerns as reasons why they chose to close their doors on the holiday.

In 2021, Target announced a permanent end to open stores on Thanksgiving Day. Although other major retailers may not follow their lead for permanent closures, it’s likely that they will also plan to keep their physical stores closed this year.

This doesn't, however, mean there won’t be deals on Turkey Day. Despite closed brick-and-mortar stores, retailers will surely be running Black Friday sales on November 24th. Some businesses may even plan to offer curbside pickup that day as well.

Our advice - In an effort to remain competitive, yet still respectful to employees, ensure you’ve got a smooth online sales operation ready to roll on Thanksgiving Day.

Paying for purchases in instalments is a trend that isn’t going anywhere. Traditionally, instalment payments were used for bigger investment-type purchases, such as electronics, furniture, and appliances.

However, more retailers have begun to partner with companies that offer these types of payment programs, allowing buyers to pay for just about anything (e.g. a new jacket), in instalments.

In 2022, we predict that retailers will increase promotions for instalment-style payment options for the Black Friday season.

6. Retailers will use Cyber Monday to reduce deadstock 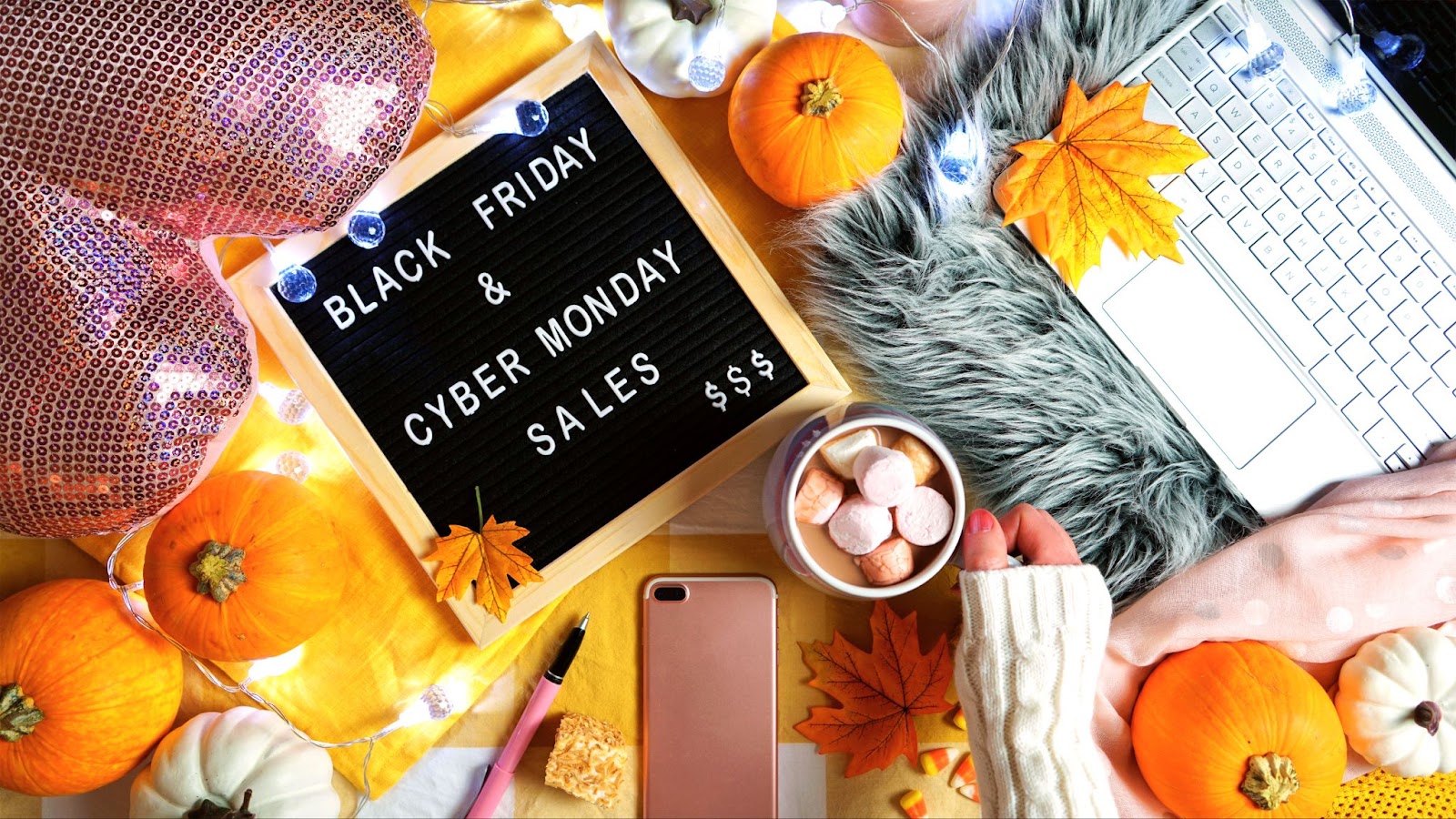 However, it’s also a “second chance” for retailers to avoid a surplus of deadstock.

With the economy in crisis, retailers need to cut back on unnecessary spend. According to research by ROI Hunter, 32% of retail marketers still decide what to promote digitally based on gut feeling, and only 36% know which products have the highest and lowest margins.

To cut down on wasted expenditure, we predict Cyber Monday 2022 will be a near clone of Black Friday, so merchants can capitalise on and get rid of leftover unwanted stock.

Our advice - Go a step further from cloning Black Friday by ramping up deals on low-performing products during Cyber Monday.

If you’re looking for cost-efficient ways to cut back on deadstock, learn how product performance data can help you stock up on the right products.

It’ll be interesting to see how things pan out in (what we hope is) a post-pandemic Black Friday season. The most important thing right now is to finalise your Black Friday strategy, because it’s going to be an early, long sales period confronted by economic and geopolitical issues that could have major effects on the success of your season, if not planned for accordingly.

For further strategies about how retailers can save their budget (without slashing marketing) in 2022, check out The Retailer's Guide to Healthier E-commerce Marketing e-book. 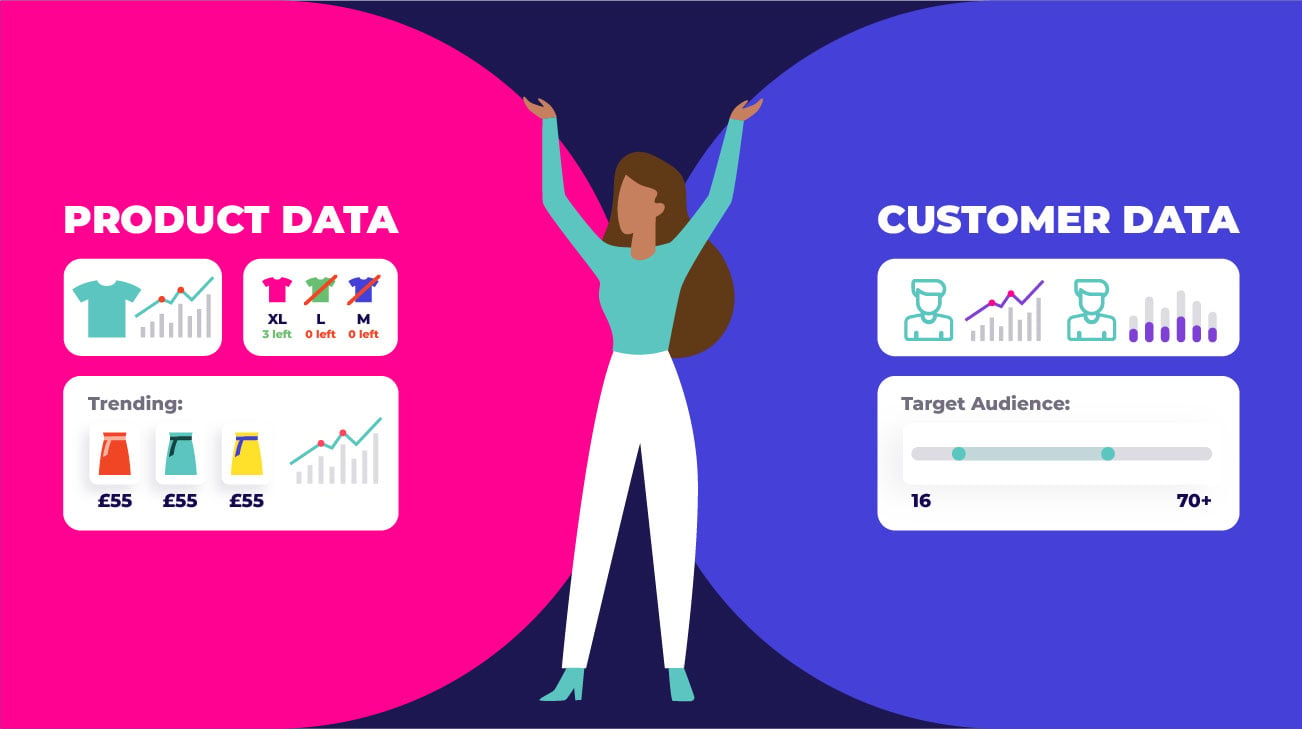