← back to all success stories
E-commerce south africa

How Vodacom used their business data to 5x their returns

Vodacom is a mobile communications company with roots in South Africa. They have since expanded to include operations in 48 countries. Vodacom provides their millions of customers with numerous communication services, ranging from data, mobile, and fixed voice, to messaging, financial services, and Enterprise IT.

Vodacom needed a partner that could handle both the data and the creative aspects of e-commerce. That’s where ROI Hunter, a Product Performance Management (PPM) platform, came in.

To begin the cooperation, ROI Hunter ran an audit of Vodacom’s Meta setup. Reviewing the results, ROI Hunter next guided Vodacom toward an ideal setup of their Facebook pixel, and helped them to implement Meta’s Power5 best practices:

With Vodacom’s full potential now ready to be unlocked, ROI Hunter helped them connect product-level performance data (margin, average number of transactions, etc.) from across their channels, combining it with their catalogue to create a single source of truth. ROI Hunter also added Vodacom’s Adobe business data, connecting it through a custom source.

Now that their cross-channel performance data was connected, Vodacom was able to filter their catalogue to create product sets based on specific goals (e.g. a group of the latest products for a new arrival campaign, a group of high margin products for a profitability campaign). Using their Adobe business data, Vodacom created a product set of their bestsellers based on number of transactions.

With all of their data streams now integrated, Vodacom was ready to focus on improving the creatives that the data was powering! ROI Hunter showed Vodacom how they could use the PPM platform’s Photoshop-like Template Editor (TEDI) to enhance their Dynamic Product Ad (DPA) creatives.

Using TEDI, Vodacom was able to create dynamic ads in minutes, without needing to use a graphic designer. Beyond that, they used a TEDI feature that allowed them to pull text dynamically, meaning they could change the copy in their ads without needing to go through another Meta review. 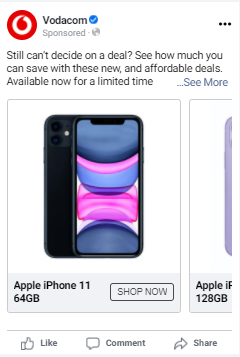 ROI Hunter compared the results for both new vs old creatives, and the new vs old dynamic ad set-up. They found significant improvements in both cases.

“Thanks to ROI Hunter’s ‘Product Insights’ we were able to connect our product level business data to our catalog, and use it to push relevant products on Facebook. This, in combination with the templates helped us in improving the key metrics”